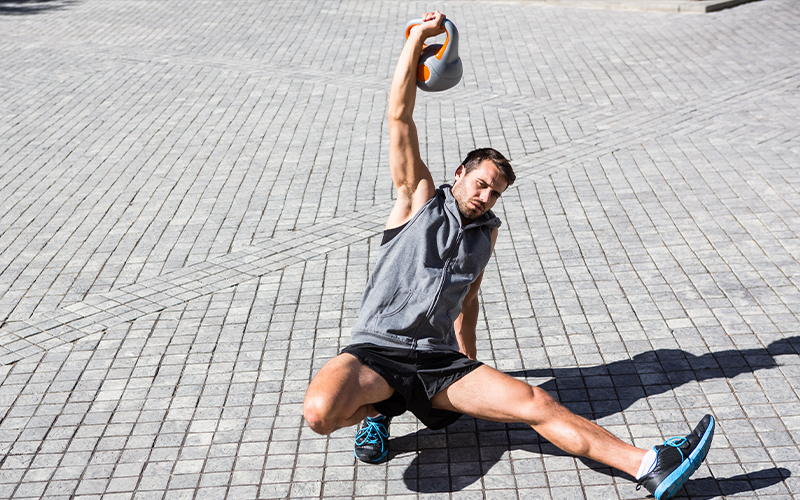 There are many parameters that have effects the success of athletes, like exercise, motivation, determination, nutrition, all of which have genetic backgrounds. To have the optimal approach, all of these conditions should complement each other. In this study, we aimed to analyze and compare the monocarboxyl transferase 1 (MCT1) rs1049434 polymorphism, which is important to determine the lactate levels, in long and short distance running athletes. A total of 30 athletes, 15 of which were power athletes and 15 were endurance, were enrolled for the study. DNA isolations were carried out by using commercially available DNA isolation Kit, and genotyping process was by real-time PCR. Of the 15 power athletes, 14 (93%) and 1 (7%) athletes had AT and TT genotypes, respectively. We detected no AA genotype in power athletes. In endurance cohort, 4 (27%), 8 (53%) and 3 (20%) athletes had AA, AT and TT genotypes, respectively. When we count the alleles, A allele was counted as 14 (47%) and 16 (53%) in power and endurance athletes. For T allele, 16 (53%) and 14 (47%) were counted in power and endurance cohorts. No statistically significant difference was found between groups in the terms of genotype and allele. In our cohort, AT genotype was higher in both groups, whereas both alleles were equal in our cohort. Our basic goal is to be able to channel the athlete correctly and carry it to maximum success in a shorter period of time considering the genetic predisposition.

Athletic performance is a component of the athlete’s ability to produce athletic work, production quality and production capacity both positive and negative factors. Twin studies showed that, on average, 66 % of the variance in the athlete status is explained by the contribution of genetic factors (depending on sports discipline). Factors that effect athletic performance like endurance, strength, stiffness, flexibility, neuromuscular coordination and psychological properties are all considered to be enhanced by genetic factors (Ulucan et al., 2014). Based on these findings, it is possible to say that the athletic condition is largely influenced by heredity. The remaining variances can be explained as unshared environmental factors, like nutrition, mental guidance, sleep etc. The association of the genetics with the sportive performance can be understood by examining the distribution of alleles in the athlete. If the related allele is more common among the elite athletes than the general population, it is understood that the allele influences the athlete’s athletic performance (Weyerstraß et al., 2018; Sawczuk et al., 2015; Guth and Roth, 2013; Eynon et al., 2010). Many spawning performances require long duration low level activities and repeated short duration high intensity exercise sessions. In this type of repeated metabolic activity, aerobic and anaerobic respiration occurs. In continuous exercise sessions, the level of the corresponding lactate could reach to very high levels. The accumulation of lactate in the cell leads to inhibition of glycolysis. In order to maintain continuous high density contractile activity and prevent acidosis, it is necessary to transmit lactates accumulated in white skeletal muscles using glycolysis as an ATP source to neighboring red muscle fibers. Here, the neighboring red muscle fibers can transform lactate transduction, which is transferred, and oxidize it as fuel (Lund et al., 2018). A study by Pilegaard et al. reported that individuals have different lactate transport capacities and very high capacity has been observed in well-educated people. This observed difference in capacity may also indicate hereditary athletic abilities (Pilegaard et al., 1999). Monocarboxyl transferase 1 (MCT1) and Monocarboxyl transferase 4 (MCT4) play a role in the transport of lactate between white muscle fibers and red muscle fibers. MCT4 is involved in the transport of lactate out of the cell to prevent accumulation of lactate in the hyper-glycosylated white muscle fiber, while MCT1 is involved in the transport of white muscle fibers through the MCT4 to the red skeletal muscle to transform lactate into pyruvate. There is a great correlation between the amount of MCT1 exerting in muscle fibers and oxidative capacities (Fedotovskya et al., 2014; Merezhinskaya et al., 2009). A common functional polymorphism (A/T transversion, rs1049434) within MCT1 leads to a glutamic acid and aspartic acid replacement at position 490, and effects lactate transport rates. Minor “T” allele was found to have 60-65 % reduced transport rates during heavy intensity weight training when compared to “A” allele (Cupeiro et al., 2010).